Reports appeared in the press recently proclaiming that humans produce new brain cells throughout their lives (for example, The Guardian ). This account appears to contradict previous reports such as

in The Conversation and in Discover Magazine

Don’t we all wish these scientists could make up their mind (pun intended)?

The most recent accounts that the brain generates new cells throughout life did not surprise me as it’s something that has been known for some time. The surprise was that the newspapers thought this was some new breakthrough. I had the enormous privilege of sitting on the Scientific Advisory Board of the Karolinska Institute’s Human Regenerative Map Project where this very subject was studied several years ago. Before I say anything about the results, let me explain the background to the experiments because that, at least for me, is the really interesting part. 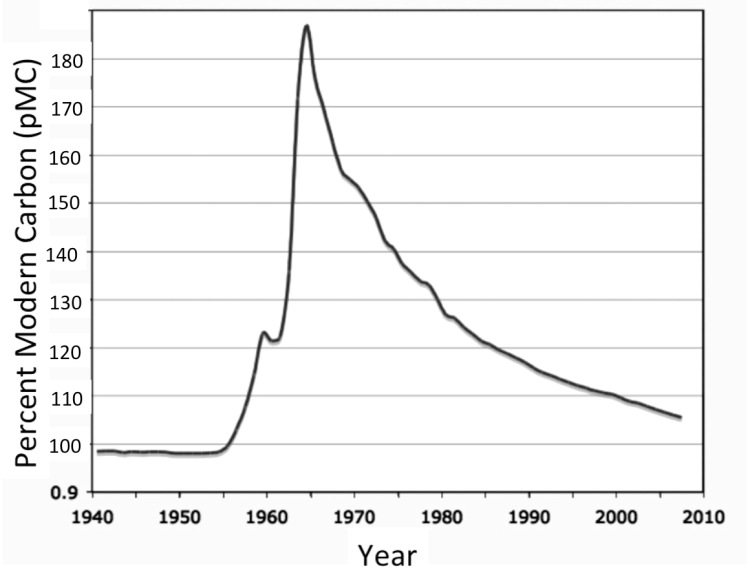 The atomic bomb tests of the 1960s released radioisotopes into the atmosphere. One was a radioactive isotope of carbon called carbon-14. The amounts released were surprisingly high as the atmospheric concentrations almost doubled from the pre-1950s levels. (The absolute amounts are still tiny – in the parts per trillion and so there’s no need for alarm). Over time carbon-14 sequestrated into the oceans and following the 1963 treaty to limit testing, the levels fell again. The Figure shows a plot of atmospheric carbon-14 versus year which has become known as the bomb pulse (units of percent modern carbon represent atmospheric carbon-14 concentrations).

As part of the human regenerative map project, samples of tissue were taken from consenting Swedish individuals after they died. The dates of birth and death had been recorded and so all that was necessary was to measure the carbon-14 in the tissue and the cellular turnover rates could be calculated. Of course it wasn’t really that simple because cells contain a plethora of substances all of which might be replaced within the body at different rates. To get specific results, it was necessary to measure carbon-14 in the cell’s DNA, which is technically very challenging. An extremely sensitive instrument called an accelerator mass spectrometer (AMS) was used to do this and a picture of an AMS control console decorates the home page of this blog.

Incredibly therefore, the death and destruction following development of the atom bomb has now been put to a much more beneficial use towards understanding the human body.

Before I leave this post, I should mention what the carbon-14 data told us. To do so, I need to give a little technical background. The hippocampus is the region of the brain involved in consolidating information from short-term to long-term memory. Within the hippocampus sits the dentate gyrus which is believed to be involved in new episodic memory and problems in this area are stereotypical of the older generation. The functioning nerve cells of the hippocampus, and the brain generally, are called neurons but unlike the majority of other cells in the body neurons cannot divide. This is itself evidence that brain cells are never replaced but as ever, let’s not make superficial conclusions and look a little deeper and consider where neurons come from.

Track them back and they originate from neural stem cells which then differentiate into a sort of primitive nerve cell called a neuroblast. Neuroblasts are then committed to divide and differentiate into neurons. Neurons themselves cannot divide and so when they die they are gone forever but is it possible for new neurons to be formed from the differentiation of neuroblasts? This has been a point of debate for many years bearing in mind there is a large number of neuroblasts in the dentate gyrus of infants that rapidly decreases and are virtually absent in the adult. This somewhat circumstantial evidence pointed towards minimal neurone regeneration at least in this area of the brain and so the old adage may well be correct.

What was actually found through measurement of carbon-14 from the bomb pulse, was that around a third of the cells of the hippocampus are subject to exchange, which is approximately 1.75% per day. This is good news for those of us who have more years behind us than to come, in that there was little decline in this regeneration with age.

There is however another side to this story. Within the forebrain of vertebrates sits the olfactory bulb. As its name implies, the function of the olfactory bulb relates to smell. The olfactory bulb in rodents changes markedly after giving birth as a result of the generation of new neurons. The same is observed in adult monkeys and is believed to be related to olfactory signals from the new born. The same is not true in humans however, and the neurons of the olfactory bulb date pretty much to the day you were born. Don’t ask me why, I don’t know. Perhaps humans have evolved other ways of recognising our young than smell and so it is no longer necessary but this is of course, pure speculation.

So the answer to the question, do humans produce new brain cells throughout their lives? It depends on which part of the brain you’re talking about. Now isn’t that a surprise.