This day, 6th August, marks the anniversary when in 1945, the first, and to date only, nuclear weapons were used in war. A uranium bomb nicknamed Little Boy, exploded over the Japanese city of Hiroshima and three days later a plutonium bomb nicknamed Fat Man detonated close to Nagasaki. By the end of that year the death tolls from the detonation and subsequent injuries were between 90,000 to 120,000 in Hiroshima (population 330,000) and 60,000 to 80,000 in Nagasaki (population 280,000). In amongst horrendous death and suffering, in the aftermath of the Japanese surrender on 2nd September 1945, medical researchers gathered data on the biological effects of radiation, especially from Hiroshima and the surrounding area. Known as the Life Span Study run by the Radiation Effects Research Foundation, scientists looked at the long-term effects of radiation and incidences of cancer in exposed and unexposed individuals.

Results from this study are used as part of modern risk assessments in setting limits for radioactive exposure in medicine and the nuclear industry. These data are only useful however, when correlated to radioactive exposure from the atomic explosions. Those measurements were impossible at the time of the detonation and so radiation exposure had to be based on theoretical estimations. That was until the 1980s, when science ever ingenious, found a way of effectively going back in time to measure the radioactive density which hit those Japanese cities in the last days of World War II.

In the city of Hiroshima, there’s a memorial called the atomic bomb dome. It’s what 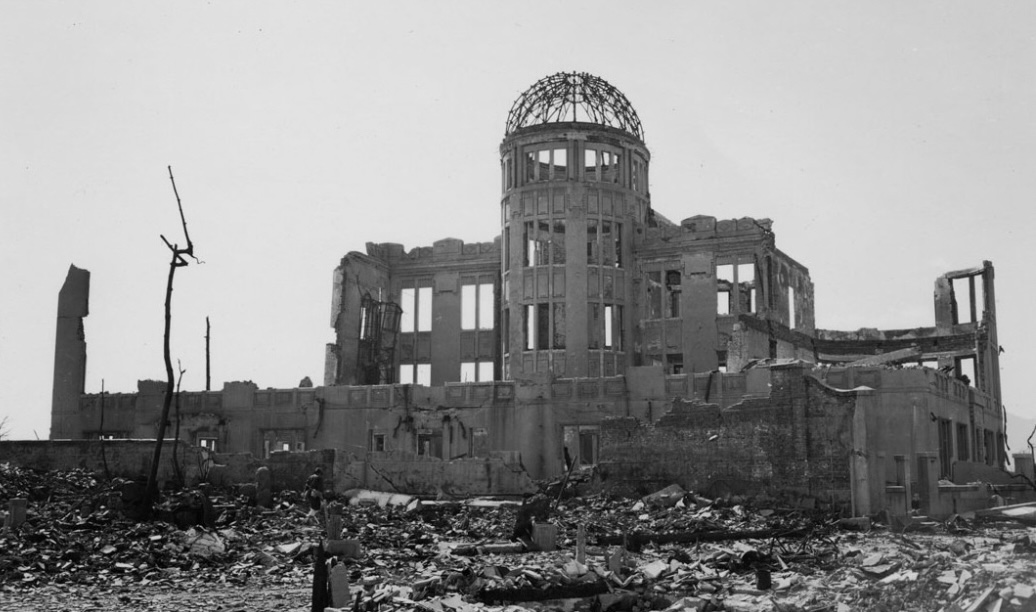 survives from the Prefectural Industrial Promotion Hall and its oval dome of copper. The bomb vaporised most of the copper but some fragments survived. Copper has two principal isotopes, 63Cu and 65Cu. Isotopes are elements that have different numbers of neutrons in their atomic nucleus and consequentially, neutron bombardment can transform one isotope into another. In the case of 63Cu, neutron bombardment switches it to an isotope of nickel – 63Ni. This isotope is extremely rare in nature and so any 63Ni found in the remains of the copper dome had to result from neutrons released during the atomic explosion. By measuring the amount of 63Ni versus 63Cu in the surviving dome fragments, scientists could calculate the neutron density of the bomb. The original theoretical calculations didn’t exactly agree with measured values, but were nevertheless close enough to allow a recalibration of the risk assessments.*  Isotopes, in this case, got us as close to a time machine as we’ll probably ever get.